It maybe a while between this bookworm post and the next as
I have just started reading Fifty Shades Of Grey series for the second time.

Now I chose to read Lone Wolf by Jodi Picoult at the beginning of the month.
It took me just one week to read which was rather good going considering how
slow I've been reading in recent months. 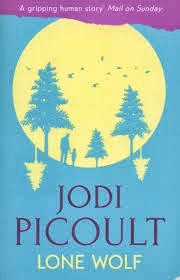 Lone Wolf is a story of a family divided that come together
and make a fateful decision.
Cara who was once protected by her father is tormented by a secret.
Her brother Edward also has secrets of his own, which he has hidden and now comes
to light. Their mother Georgie  was never able to keep with her ex husbands obsessions
and now his fate hands in the balance of her two children who both want different things.
What will the family decide? and will they be able to live with that decision once the
truth is revealed?

I normally love Jodi Picoult novels but I have to say I was hugely disappointed.
I found that unlike her other books the characters were rather boring  in Lone Wolf.
Although this was a disappointment I won't be letting it put me off reading more of her books.