We started off by giving him cows milk mixed in with weetabix and then moved on to giving him
whole milk as his first feed of the day. As he only has 2 feeds a day he was having one bottle of cows milk in the morning and a bottle of formula in the evening before bed.

He now drinks whole milk both in the morning and night as well as mixed in with meals such as cereal.
We have been lucky that he hasn't seemed to have noticed any difference or if he has he's not made a fuss.
We still heat his milk as he has always been fussy with the temperature.

Our next step is to try and get him to drink his milk from a cup instead of a bottle I am hoping that he
will be fine with it as he tends to be really good drinking water from his cup. 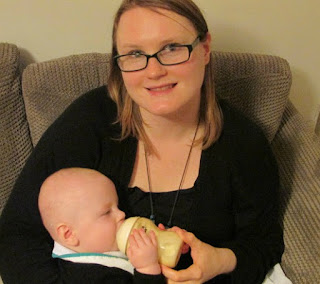 If your little one has started drinking cows milk how did you get on?
Labels: Blake cows milk formula parenting