One month of Pre-School 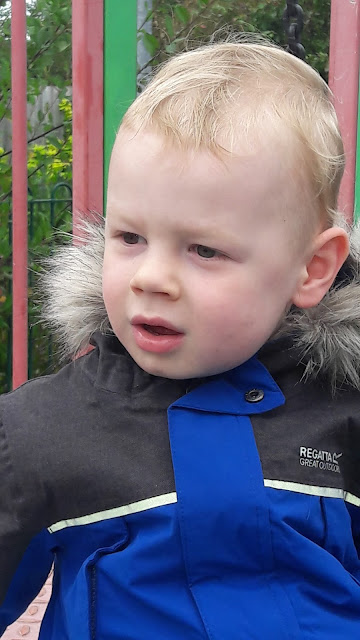 It's been 4 weeks since Blake started Pre-School. Summer seemed to fly by and before long we were having to get into the swing of a new routine. After having Blake with me for near enough 24/7 since he was born, it was a new experience for me not having him around for 2 hours a day Monday - Friday.

I had been feeling very anxious about Blake starting Pre-School, especially with his friends going to a different one from him and so he would not know anyone. I knew though that he would love it there and benefit from it in many ways.

The Pre-School he goes to is attached to the school that we are hoping to put him in when the time comes It also happens to be the Pre-School that Stuart and his siblings went to when they were little too.

Day one arrived and both Stuart and I dropped him off and met his key worker who on here I will call J. I don't think he really understood what was going on and was very surprised when we left that there were no tears and on pick up was told he hadn't been upset but had looked around for us which we thought was such a great start!

The rest of the week though was a different cup of tea unfortunately. Day two I ended up having to pick him up early as he was tired (bless him) and they were unable to settle him. The rest of the week we left him in tears, however we were told that he stopped crying pretty quickly.

Since then we have some days where he is fine and so excited to go in and see J and other days he doesn't want to and we leave him either in tears or fake crying (by that we mean just wanting attention/cuddles). Luckily he seems to be settling pretty quickly although since last Thursday he hasn't been himself with a cough and cold.

The Pre-School has a website where we can access photos of what Blake has been up to which I really love as we can see what he has been up to and it's reassuring too. In the 4 weeks that Blake has been in Pre-School we have noticed a few changes in him, for example; although he still isn't really talking he does seem to know a few colours and has an understanding of more things. We have also come home with some art work which is lovely too as he hasn't really been into painting at home. It looks like that may be set to change.

Sleep-wise, we have tried getting him to nap in the morning which just isn't happening so we are waiting til he gets in from Pre-School and still putting him to bed at his usual time. It seems to be what is working well for us at this moment in time though so we will be sticking with it for now.
Labels: parenting Pre-School transition