So on Saturday Blake was 5 months old a lot has been going on since his last update.
Which of course is all exciting and I love seeing Blake trying to learn to do new things.

Clothing
I am moving Blake into 6- 9 month clothing this week as his 3-6 months clothing is getting too tight.
His vests and trousers in particular wont fit over his cloth nappies anymore and his feet are right at the
end of his sleepsuits.

Teething
He is still teething but not been as bad as last month.
He is still dribbling loads (mainly in the evening) and he loves
to have things in his mouth all the time.
I have a teething essentials post coming up soon so keep your eyes
peeled on here if you are interested in reading that.

Sleep
He has moved into the cot in his own room last week which you can read about here.
He is still sleeping very well, and getting the same amount of sleep at night as he did when he
was in our room in the moses basket.
The only difference is that he is struggling to sleep in the cot during the day for nap time.
He has a habbit at the moment of falling asleep in my arms and then I put him in the cot
and he wakes 20 mins later.
He use to have two naps during the day an hour each time when he was sleeping in the moses basket.
so that really needs to change. 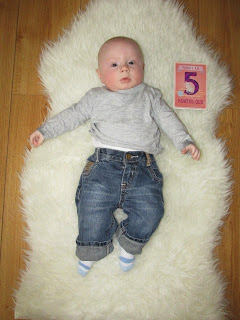 Feeding
He is still having 210ml of milk every 3 hours and we have now started weaning him over the weekend which went really well.
We have started him on baby rice which he seems to have taken to rather quickly which is a good thing.
We are happy about this as we were sure that he is more than ready.
You can read our plans for weaning Blake here.

- Blake loves playing with his hands and feet
- He loves blowing bubbles but his new favorite thing to do is blow raspberries
- When he is sat in his bumbo seat he likes to try and reach for his toys
- He smiles spontaneously and smiles back at us when we smile at him
- He is also trying to sit up he keeps pulling his head and legs up but can't quiet manage
it yet.
- On Sunday he chose to roll over for the first time

Other
- He is still in size 3 nappies when using disposables
- He loves being sung nursery ryhmes and he loves humpty dumpty, grand ol duke of york and
row, row, row your boat.
He has the biggest grin when I sing them to him.
-  He gets frustrated when in his bouncer for too long as he wants to sit up by himself.
- He loves seeing his friends when we go to mum and baby groups.
- He has moved into his pushchair which he loves the only thing is that it faces away from me
which I'm not too keen on.