Blake is 9 months old today, it's strange to know that in 3 months time our little boy will be 1!
The last 9 months of him being here with us have gone by so much faster than the pregnancy.
I still feel like it was yesterday that I found out I was pregnant and doing 3 tests and still not feeling like it was all real.

Blake is still fitting well in 9-12 months clothing.
He has a few tops which are a little tight, however I've worked out that Peacocks clothing tends to not
last as long as on him as other brands he wears and tend to come up smaller.

Teething
He has his 2 bottom teeth but that's all so far, he has started to
dribble more again so don't think it will be that long til more start to come through.
At the moment I've not had to give him any teething gel or calpol (touch wood).

He is still sleeping well except when he has a cold.
He has had another cold this month which made him not sleep well for 4 nights
in a row but he slept more in the day.

He is on three bottles a day of 240ml although not always finishing them every day.
He is eating 3 meals near enough every day now.
I have been struggling to get him to drink some cool boiled water but my health visitor has told me that
it's not anything I really need to worry about at the moment. 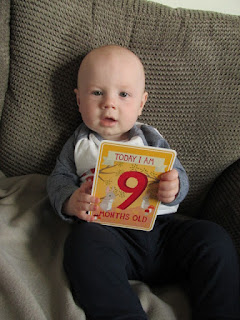 Having Blake's 9 month review today has meant that I have realized more of what Blake can do which makes me so proud.

He has most likely been doing these things for awhile now I've just not took notice in them as
much as the  big milestones.

- He is able to sit up unsupported now when he chooses to but is rare as he doesn't like to and much prefers to stand or practice trying to crawl.

-  He can pass a toy from one hand to the other

- he can pick up one small toy in each hand.

- He can bang one toy against another on a table

- He is able to find small toys under a cloth after watching us hide it.

- He can drink from a cup (when he wants to)

- He is able to feed himself

- when dressing him he is able to push his arm through the sleeve once his arm is started in the hole.

- He is able to say Da Da and other babbling

- Blake has started clapping his hands and tends to do this when being dressed or when watching
Cbeebies.

- He loves In The Night Garden especially Iggle Piggle and sequels with excitements and does little jumps.
This evening I looked over to see him waving at the TV when Iggle Piggle was the screen.

- We have joined a new baby group called baby beeps which is a song session but very sensory
with feather, lights, parachutes etc.

- We have also started taking Blake to swimming lessons on a Saturday afternoon.