Our little boy is now ONE!

He is more like a little boy now than a baby and that saddens me.
He's growing up way too fast and I do miss the newborn days
of him being teeny tiny. But he''ll always be my little boy
no matter what age he is.

Blake is now able to stand whilst holding onto furniture and with support he can take a few steps which is crazy.
I know soon he'll be zooming away everywhere.

We need to put up a safety gate now as a definite as I caught him in the kitchen trying to open a
cupboard the other day. 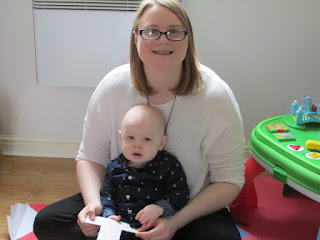 I've managed to get some great photos of him on his special day which was tricky as he doesn't like to keep still. My favorite has to be of him in his ball pit which me and Stuart got him.
He got so many wonderful presents from everyone not just from family members but from some of his friends too. 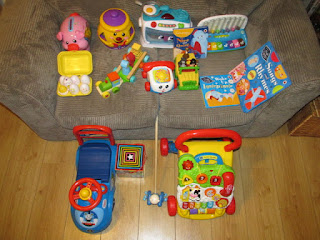 He loves books and will sit on our laps and listen to us read  them and also
attempt turning the pages.
His favorite nursery rhyme is twinkle twinkle twinkle little star which he tries to  do the actions to.

He now has eight teeth and I think he has got some more coming through near the back as
he is dribbling loads. 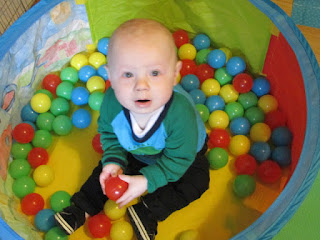 Since his last update we have been doing some great festive /non festive things.

- We have made Christmas baubles
- Met Santa
- Worn reindeer antlers and sang Christmas songs at baby beeps
- Read Christmas books
- Listened to Christmas Music
- Been to soft play for your birthday
- Had your first birthday party on the 13th
- Been to two Christmas parties with the Children's center and the NCT.

So overall we have had a fab month.

I'll be back with Blake's next update in June when he will be 18 months.
I'm sure I'll  have lots to tell you about.
Labels: Blake development